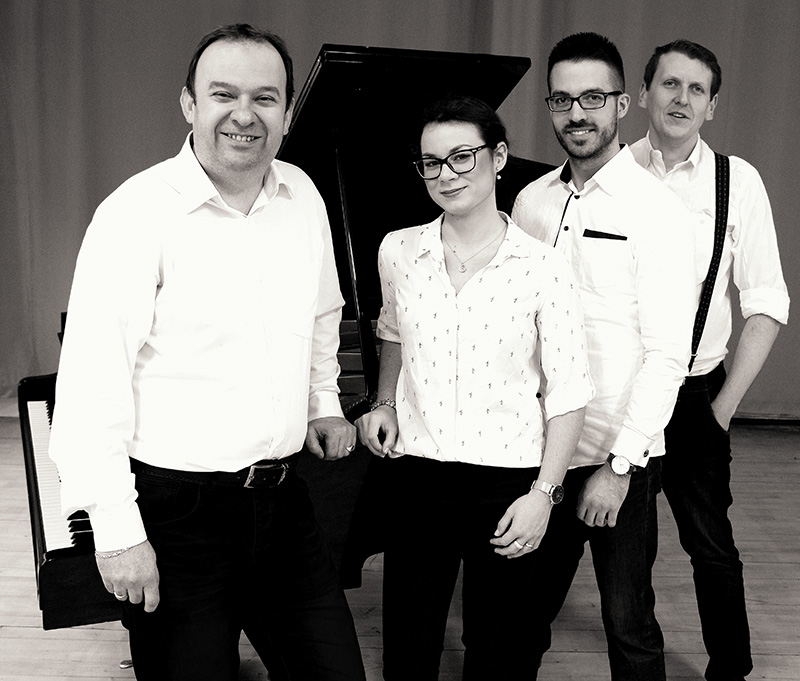 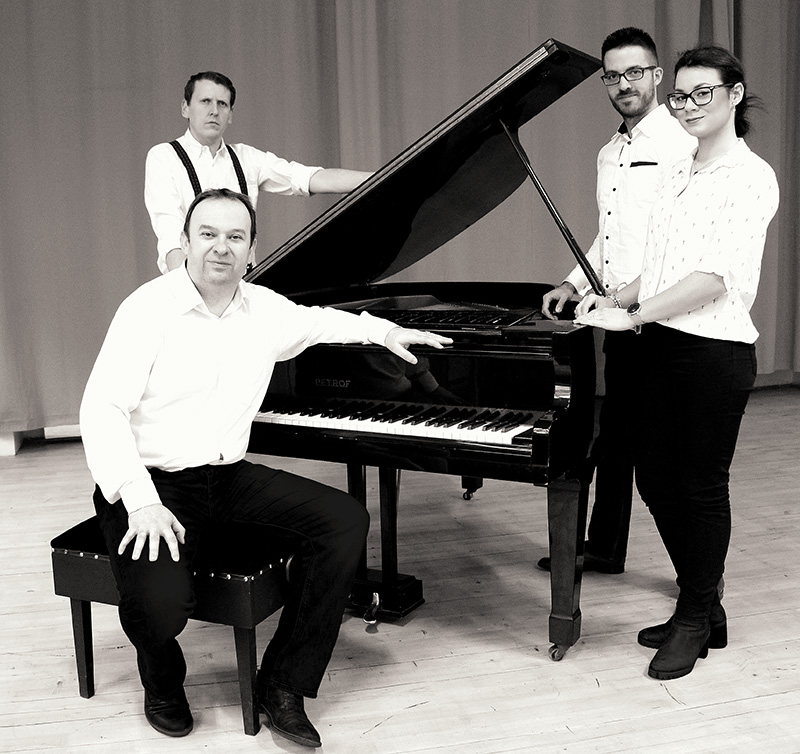 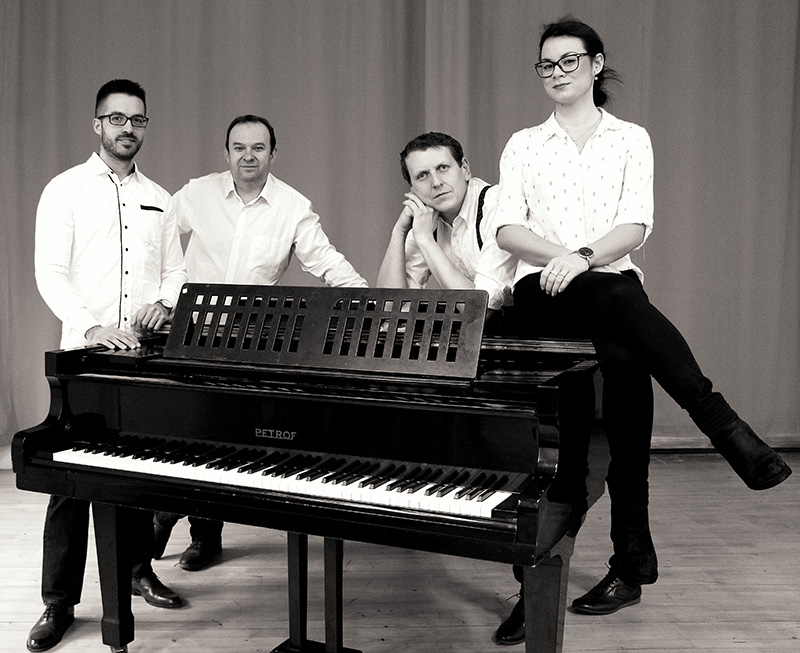 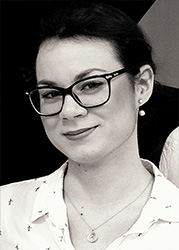 She was born on 17 June 1993 in Rožňava. After graduating from Pavol Jozef Šafárik High School, she went on to study the Dramaturgy and Management of Music at the Music and Dance Faculty of the Academy of Performing Arts (APA).

Devoted to music ever since her early childhood, she took piano lessons at Rožňava Music School from which she later graduated and where she also took part in a choir called Allegro.

Music inspired her next steps which lead to the APA in Bratislava, where she was taking piano courses for two years with Mgr. art. Cyril Dianovský during her Dramaturgy studies.

During her university studies, she gained experience at the Slovak Philharmonic by collaborating with PhDr. Ivan Marton, the Philharmonic’s dramaturge, and with Martina Tolstova, the Philharmonic’s press secretary, for the marketing division. She contributed to creating the programme for the Cinema Music concert and published articles about concerts in the Musical Life magazine. 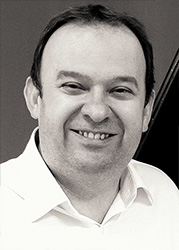 He was born on 8 November 1977 in Nové Zámky. After graduating from primary school, he went on to Nové Zámky High School where he studied from 1992 to 1996. During his high school studies, he took violin and accordion classes at Nové Zámky Musical School. After graduating from high school, he went on to study Composition at the state Conservatory in Bratislava with Mgr. art. Stanislav Hochel. He graduated from the Conservatory after three years and then became a student of the APA in Bratislava, where he studied Composition with Doc. Evgenii Irshai. He finished the studies in 2006 and until 2009 he was a postgraduate student at the Music and Dance Faculty of the APA under the tutelage of Mgr. art. Ladislav Kačic and at the same time worked as a tutor. In 2009, he successfully defended his dissertation and completed his postgraduate studies.

From 1999-2010, he taught Composition, Music Theory, History of Music, Ear Training and Playing Keyboard Instruments at the Private Music School of Gabriel Rovňák. Since 2008, he has taught Composition and theoretical subjects at the state Conservatory in Bratislava. Nowadays, he also teaches Composition, Music Theory and Analysis, Counterpoint and Harmonics at the Music Theory Department of the APA in Bratislava. Apart from his teaching activities, as a composer and conductor, he attends many local and foreign music festivals, e.g. New Slovak Music, Melos Ethos, Orfeus, etc. In 2012, he stood at the birth of Ensemble Spectrum – a new youth orchestra to the APA – as its artistic guarantor. In 2013, he was awarded Ján Levoslav Bella Award for composition for Ó Mitissima Virgo Mária, a spiritual cantata. In 2013, he became the court composer for Ad libitum, a chamber ensemble from Budapest and since the same year he has held the position of a deputy chairman of the Association of Slovak Composers. Since 2016, he has held the position of a coopted member of the Board of Supervisors of the Slovak Performing and Mechanical Rights Society based in Bratislava and at the same time he acts in the Council for Science, Education and Culture of the Conference of Bishops of Slovakia. 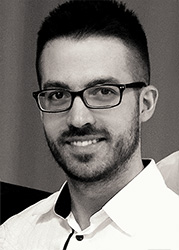 He was born on 20 May 1987 in Bratislava. Having graduated from the private Academy of Animation high school, he went on to study Mass Media Communication at the University of Ss. Cyril and Methodius in Trnava and finally he studied Composition at the state Conservatory in Bratislava. Aged 11, he took his first steps into the world of music and started taking piano lessons which excited his interest in composition. Later, he took on guitar and singing classes. During his university studies, he started to create his first orchestral compositions. 2010 represented a turning point for him, since he participated in a project called Hockey Heroes of Slovakia, which achieved great success. Afterwards, he composed music to a student short film Perdition for Los Angeles Film School. In the same year, he was offered to compose music to the film Lóve, which became the first feature film he collaborated on. Moreover, Lóve ranks among the most successful Slovak films overall.

From 2012 to 2017, he was composing music for a successful TV series Taste of Love (9 seasons / 706 episodes) and studying Composition at the Conservatory in Bratislava with Mgr. art. Ľuboš Bernáth, ArtD. at the same time. In 2013 he won first place in the first category in the competition of Conservatory students of the Slovak republic with his first string quartet. In 2015, he collaborated with Michal Novinski, a successful composer, on orchestration and music preparation of his score to the feature film titled Wilson City. The piece was nominated for the best original score (Czech Lion Awards 2016). Similar scenario repeated in 2016 with a successful film called Teacher directed by the reputable Jan Hřebejk. The score for this film was awarded FICX Award for best original score (54. Gijón International Film Festival, Spain). The same year, Novinski and Kobela asked Ľuboš Bernáth to collaborate with them and together, they started composing a score to the Secrets of the Carpathians trilogy. The first part of the trilogy called Life in the Clouds was released in December 2016, the second one The Immortal Forest in March 2017 and finally the third part The Living River in September 2017. At the same time, he collaborated on music preparation of Michal Novinski’s score to the feature film Barefoot, directed by the Oscar winner Jan Svěrák, which was released in August 2017. Shortly after, he collaborated in the same way on Plan B, a Polish film.

At the turn of 2016, he started a successful author collaboration with Remo Klačanský, his former classmate from the Conservatory. Together, they composed music for two TV series Kitchen and Mistresses, which aired on Slovak TV Markíza from March 2018.

Music for Film, TV and Multimedia: 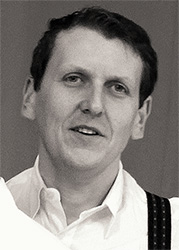 He is a graduate from the Faculty of Philosophy and Arts of the University of Trnava (History or Arts and Culture) and the Music and Dance Faculty of the Academy of Performing Arts in Bratislava (Opera Directing, Theory of Music).

The main 20th century opera composers he has dealt with are Bohuslav Martinů (Tears of the Knife, Bratislava, 2015, Voice of the Forest, Ostrava, 2010, Comedy on the Bridge, Ostrava, 2010) and Gian Carlo-Menotti (Amelia al ballo, Bratislava, 2013, The Telephone, Bratislava, 2003, musical rendition by Sarah Meredith, an American vocal pedagogue, the role of Lucy performed by Adriana Kučerová). Some of the abovementioned operas were Slovak premieres.

He authored several plays which he also directed: I Am Leaving the Earth to Go to Heaven (Bratislava, 2001); Margita and Besná (Trnava, 1995).

He made his literary debut by writing a novella The Necessity of Crying for Men: Proportionally Short Poems in Prose (published by Theatrica, 2014).

His main theoretical focus is on the history and aesthetic of musical and dramatic genres, especially on 17. – 19. century opera, on the history of art, chiefly on 13. – 18. century Italian art, on Medieval iconography, on Franciscan art and on Classical and Christian symbolism.

This site uses cookies. By continuing to browse the site, you agree to our use of them.OkRead more